New technologies make it possible to make a digital copy of every warehouse. But what can we do with such a ‘digital twin’? What problems can we solve faster, cheaper and better in a digital environment?

A digital twin is nothing more than a digital spitting image of the warehouse or another installation. That image can resemble the original so that users can move through the virtual space and imagine themselves in the warehouse. But even more important than a visual similarity is a similarity in terms of behavior. If the digital twin reacts in the same way to changes in goods flows, fluctuations in order patterns and people’s interventions as the real warehouse, this digital model can be used for simulations, for example. What happens if the number of orders grows by twenty percent? When do problems arise if one of the cranes in the high-rise warehouse fails? The results of the simulations can be used to intervene and prevent future problems. “A digital twin is a realistic copy of the physical installation. A copy of the layout, but also of the processes and operating systems. This means, for example, that the algorithms from the warehouse management system (WMS) and the logic from the programmable logical controllers (PLCs) are included in the digital twin,” says Tim Hoebeek, managing partner of Quinaptis.

Quinaptis is a Belgian ICT service provider specialized in optimization, automation, and digitization of warehouses running on SAP software. Together with PLC manufacturer Siemens and Thomas More Hogeschool in Geel, Quinaptis developed a digital twin of a miniature warehouse last year. In this, the warehouse management system SAP EWM works together with the PLCs of Siemens.

“With the digital twin, we have succeeded in detecting and correcting errors in the control of the miniature warehouse more quickly. We were able to stage errors and therefore proactively detect bugs in the software”, says functional consultant Dieter Baert, who supervised the project on behalf of Quinaptis.

That possibility is also available for real warehouses. With a digital twin, it is possible to test before commissioning whether all cranes, elevators, conveyors and other machines and systems function as intended. “This enables us to significantly reduce the lead time of automation projects. Volume tests and stress tests are a lot easier to organize in a digital twin than in a real warehouse. We can also create incidents in a digital twin without actually damaging goods or systems,” explains Hoebeek. 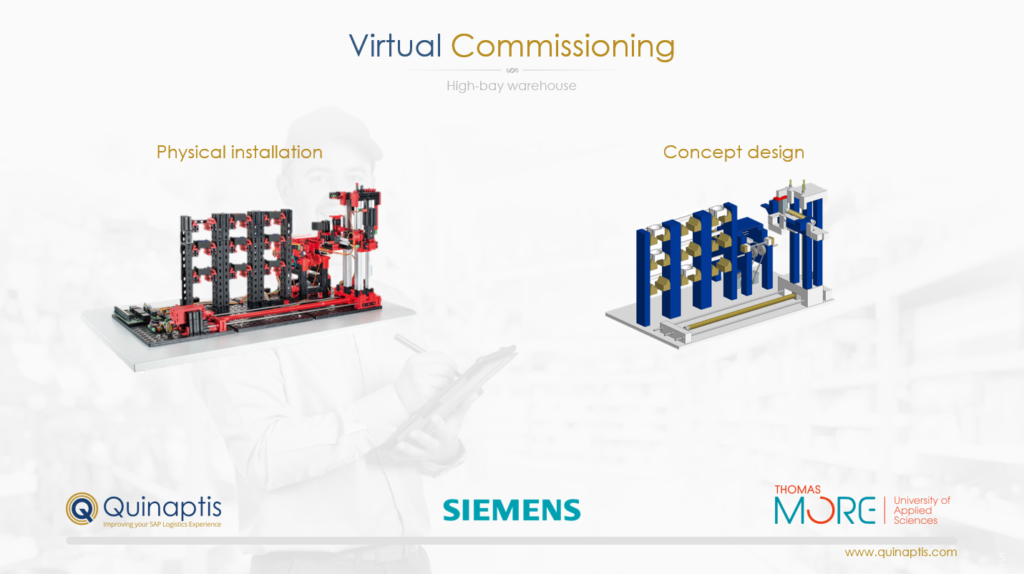 In a digital twin, for example, the design specifications of the pallet racking can be recorded, such as the maximum weight per beam. Normally, the impact rules in the WMS ensure that the maximum weight is not exceeded. If the digital reach truck driver, controlled by the WMS, accidentally places an overweight pallet on a girder, the digital girder will fail and people will see pallets actually fall during testing. “This allows us to test whether the correct impact rules are in the WMS. Of course, we would never be able to test such a scenario in the real warehouse,” says Hoebeek.

In addition to Quinaptis, Hardis Group is also investigating the possibilities of digital twins. The supplier of Reflex WMS – the system used by, among others, Bol. com – does this in the innovation lab, where technologies such as the internet of things, artificial intelligence and blockchain are also investigated. “A digital twin reflects the physical state and behavior of the physical object and can be used for visualization, analysis, and simulation,” explains Ariel Maor, senior product owner.

Because a digital twin connects separate machines, systems, and processes, new insights arise that existing data from, for example, a WMS cannot provide. Blind spots’ suddenly become visible, for example by using data from other devices or sensors. “Take, for example, surveillance cameras. In many warehouses, they already hang at the docks, but they are not yet used for logistical purposes,” says Maor. In Hardis Group’s first digital twin, developed in collaboration with Schneider Electric, security cameras play an important role. “Schneider Electric had a problem receiving goods in a warehouse. One of the docks was for urgent deliveries.

Incoming pallets had to be removed within two hours, but this was difficult to manage manually. Then someone would have had to note the time of arrival of each pallet and constantly check whether the two hours had not yet elapsed. That is why we used the images from the security cameras to record which pallets arrived at which time. On large screens in the warehouse, employees could see which pallets were left standing for too long”.

A digital twin can not only be used to identify problems but also to optimize processes. Baert calls the example a fully automatic pallet warehouse with two aisles and two pallet cranes. If one of the two cranes fails, the items in that aisle cannot be reached. This can mean that a large part of the orders cannot be delivered. “With simulation, we can investigate how to divide the articles over the two aisles in order to minimize the chance of this happening. We can also use the digital twin to find out which procedure will make the crane productive again as soon as possible after the fault has been rectified,” Baert explains.

It is even possible to predict faults in the installation. In addition to data on the movement of goods, this also requires data on the condition of the cranes, lifts, conveyors and other machines. For example, data on power consumption and motor temperature, but also data from sensors that measure vibrations in crane masts. If the engine temperature rises and the number of vibrations increases, this may indicate that the crane needs maintenance. This can be verified based on historical data. If malfunctions can be predicted in this way, they can easily be prevented by scheduling preventive maintenance. Predictive maintenance is what Hoebeek calls it. “And if a machine does shut down, we can analyze the same data to determine the cause. We can use the digital twin to check whether we have actually found the cause without triggering a new stoppage in the real warehouse”.

Another application concerns the monitoring of processes and systems. If the digital twin is continuously fed by real-time data, managers and supervisors can see on their screens how the actual operation is going. Artificial intelligence helps to analyze the real-time data at lightning speed and detect abnormalities. If, for example, a department is found to be lagging, the supervisor can decide to deploy extra people.

Extra possibilities arise if the digital twin is part of a fully digitized supply chain. In that case, for example, the consequences of delayed delivery for the operation in the warehouse can be charted in real-time. Could it hurt if that truck arrives an hour later? Or is it more convenient to bring other tasks forward? “Or take the example of shipping pallets with both heavy and lightboxes. If the lightboxes end up at the bottom, they can collapse under the weight of the heavy boxes. A digital twin can send out an alert if, based on image recognition, it turns out that the heavy boxes unexpectedly end up on top. This can prevent a claim,” says Maor, who advises looking beyond the four walls of the warehouse. “The application of a digital twin becomes so much more interesting when we look at the entire supply chain instead of just the warehouse.

Hardis Group is building a digital twin using Vision Insights, a proprietary platform with image recognition and machine learning functionality. The technology of the Internet of Things is used to enrich the digital twin with data from sensors, cranes, conveyors, and robots or, for example, from the RFID tags in plastic crates. External data about weather or traffic, for example, can also be added. Maor: “In addition, we already use drones to inventory the stock in the racks. The images of these drones can also be added to the digital twin and then analyzed. This way we can detect damaged boxes or collapsing pallets, for example. Or add information about different pallet formats.”

Hardis Group advises you to think carefully in advance about the problem that a digital twin should solve. What is the scope of the digital twin? Does the entire warehouse have to be displayed digitally? Or just a certain area or process? Then the function of the digital twin will be discussed. A digital twin can analyze all data, but what is necessary? Finally, a digital twin must be both technologically and economically viable. For example, if it is necessary to collect additional data by providing all load carriers with an expensive sensor, it quickly becomes too expensive. But if the solution costs less than the damage caused by the problem, nothing stands in the way of building a digital twin”.

Quinaptis has now used a digital twin of its warehouse for two customers. The modeling of the warehouse takes a lot of time. This requires detailed CAD drawings of the warehouse and the systems. In the future, modeling will take less and less time as libraries grow with digital objects,” explains Hoebeek. “Whether that effort pays off depends on the application. For an existing warehouse of limited size, setting up a digital twin is probably not worthwhile. However, in the case of new buildings, building a digital twin can be worthwhile just for the implementation of systems. If the digital twin is then also used for predictive maintenance, the revenue model becomes even more interesting”. 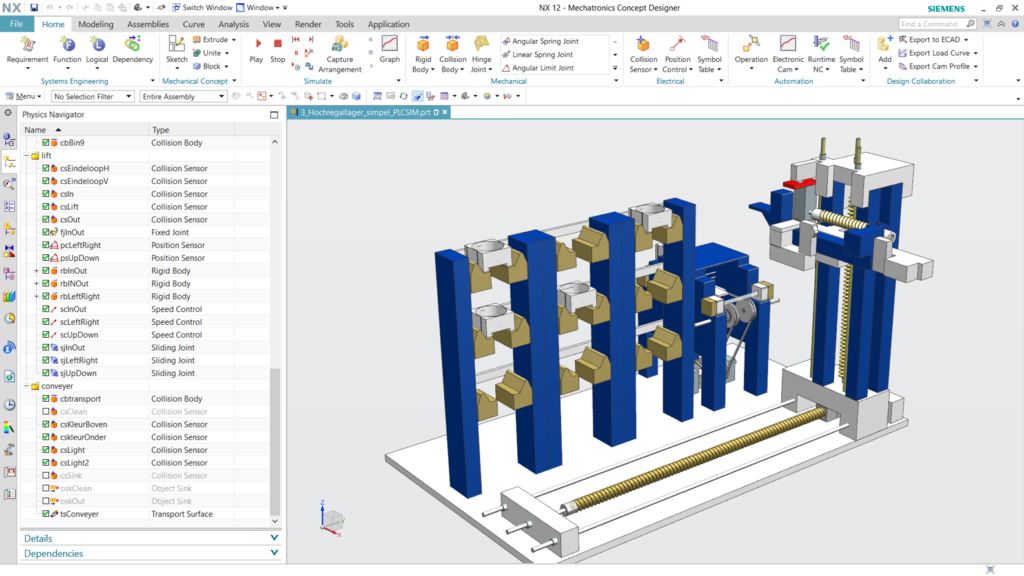 Maor wants to make the Vision Insights platform available to customers as a service (software as a service) in due course. They will then be able to configure simple solutions themselves by, for example, unlocking the images from their surveillance cameras. “The digital twin technology will then also be within reach of smaller companies.